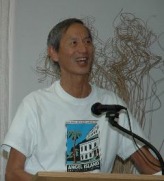 My home base ... CSU Long Beach.  A chance to speak in spring of 2007 to the Asian Pacific Islander Network (APIN) on campus on a special occasion when they honored me for my contributions to the University. 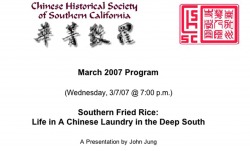 A rare chance for me to give a talk within commuting distance from home!  It also gave me a chance to get acquainted with other local scholars interested in Chinese American history.
An unexpected bonus was that a Mississippi Chinese came to the talk because of his interest in the Chinese experience in the Deep South.  At the time, when he suggested that I might want to write about Mississippi Chinese, I had doubts that I could do much with the topic since I knew other books had already been written on them, albeit 25 years earlier.  But I kept an open mind, and with the encouragement (and names of important contacts), I ended up becoming fascinated by the situation that the Mississippi Chinese were in, quite different from that of other Chinese in America.  To make a long story short, this happenstance led me to write, Chopsticks in the Land of Cotton, in 2008 to tell the story of the Delta Chinese grocers. 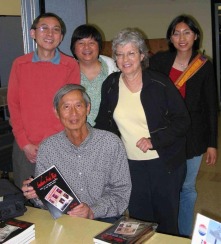 One of my Atlanta cousins, Henry, his wife Ronnie and daughter Jessica, were in town and part of the audience that also included my wife, Phyllis.  Not in photo, but it was wonderful to have Northwestern U graduate school classmate and UCLA professor of psychology, Ron Gallimore, and his wife Sharon there as well.

Evergreen Seniors Group, Chinese Christian Alliance Church, Northridge, Dec. 2008.
This talk about Chinese in the Mississippi Delta  was challenging because many audience members were not fluent in English so we decided to have a translator.  It was not as difficult as I thought it might be because she did not try to translate every sentence. I would speak for 5 mins or so and then she would give in Chinese the gist (I assume) of what I had just said. 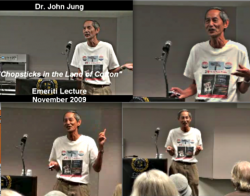 An opportunity to describe the process and chain of events that enabled a retired psychology professor to discover his ethnic identity through the publication of four books on Chinese American history and presentations to Chinese community organizations and groups. 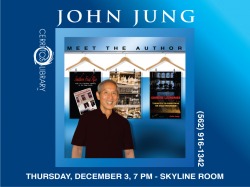 Discussion of" Southern Fried RIce" and "Chopsticks in the Land of Cotton," my two books which describe lives of Chinese in the Deep South during the Jim Crow era. 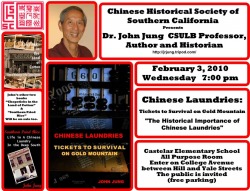 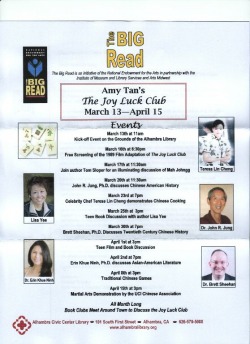 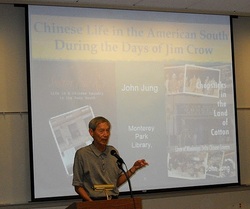 A talk about Chinese Americans in the South during Jim Crow era based on Southern Fried Rice and Chopsticks in the Land of Cotton. 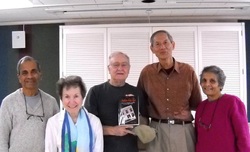 Spoke about how I created a new career in retirement writing and speaking about aspects of Chinese American history at a senior independent living community where my good friend, Flo, lives in California 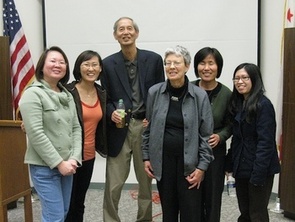 I assumed that since Irvine has a large Chinese and other Asian population there would be a good audience, but such was not to be the case! Fortunately, several Asian American colleagues came, which salvaged the evening from being a total disaster!

Colleagues from CSULB and my wife were in attendance (left) as well as several members (below) from the US-China Peoples Friendship Assn. Long Beach chapter. 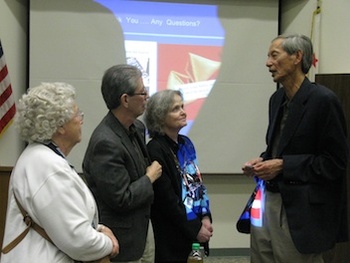