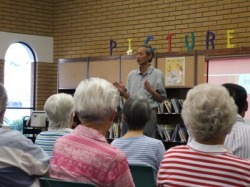 I was privileged to talk about Southern Fried Rice in Hanford,  a small pleasant town in the middle of California that most people don't know about. Believe it or not, Hanford has a rich history for Chinese Americans, and at one time had one of the largest Chinese populations in the state when the railroads were still being built.  It was also ahead of its time with the first Chinois restaurant, the Imperial Palace, to which people would come from far and wide to dine at. 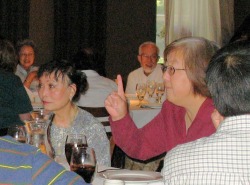 A wonderful luncheon talk about Southern Fried Rice before a lively and attentive audience. The arrangements for both the Hanford and Stockton talks were set up by author Sylvia Sun Minnick, who attended the same high school as I did in San Francisco, Lowell, and lived only a few blocks from me but we never knew each other until we became acquainted via a mutual friend who taught at my University.  How odd is that?  Sylvia gave me invaluable advice during my writing of Southern Fried Rice, and we have become very good friends. 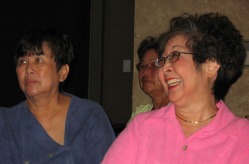