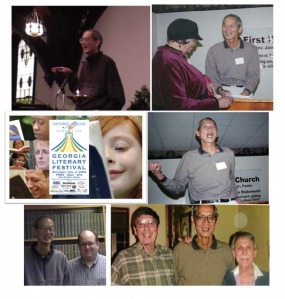 A chance after over 50 years to return to the scene where Southern Fried Rice 'happened,' Macon, Georgia, and speak about the book.  Included in my audience were junior high school classmates, a junior high teacher, and even my best friend from 1st grade.  An unexpected surprise when I met the local library genealogical expert who helped me with my research was to discover that his father and I had been classmates in junior high... how unusual is it!  It was fascinating to see all the changes, as well as all the things that were still the same, after so many years.  Our laundry building had been leveled and turned into a parking lot... and there was no historical marker to acknowledge that a Chinese laundry served Maconites from 1885 to 1955 on that site.  Southern Fried Rice will have to serve that mission and tell the tale of the Chinese in Macon during that part of history. 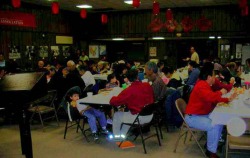 Even though I grew up in Macon, I never visited Augusta, home of the largest number of Chinese in the state.  It held particular significance to me for that is where my father spent several years working with his uncle in a laundry before he returned to China in 1927 to marry and return to open his own laundry in Macon. My visit was a pilgrimage of a sort for me.  And, I had several relatives living in Augusta who came to my talk at a potluck dinner at the CCBA which meets in an old church in town.

Who's Who in Asian Americans in Georgia 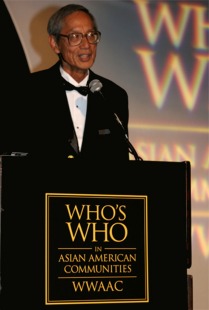 At the Asian American Studies Conference in Atlanta where I gave a paper, I met Sachi Koto, long time CNN News Anchorwoman who was now organizing a Who's Who Among Asian Americans in Georgia and she invited me to give the Keynote Address at the Omni Hotel.

I got to meet 50 or more of the outstanding Asian Americans in business, science, education, and government in the state, as well as other high ranking state officials, at this impressive black tie event attended by over 300.

All I Really Needed to Know,
I Learned in a Chinese Laundry
Keynote Address
Who’s Who in Asian American Communities in Georgia Gala,
Omni Hotel, Atlanta, Ga. April 29, 2006.

Distinguished honorees, ladies and gentlemen: I am honored to have the privilege to speak to you on this wonderful occasion… I am most impressed with what a vibrant and energetic sense of community there is among the members of Atlanta's Asian Americans.  In contrast, when I was living in Macon, we had a much smaller community…my family…we were the COMMUNITY… and when we finally left in the mid 1950s, the Chinese community was gone! The local paper noted it was the first time in 100 years that there were no Chinese in town… it was not clear from the article whether the writer was relieved or saddened!

A few years ago, in reflecting on my family’s life in Macon__ our culturally isolation for over 25 years, being the solitary Chinese, or Asian, for that matter, family in town during an era of a highly segregated society before the civil rights movement, I was inspired to write a memoir, SOUTHERN FRIED RICE, to record our family’s life in Macon and in a small way help preserve and share a bit of Chinese American history that few people outside of the South know about. There isn’t time enough tonight to go into any detail about our family story so I want to say a few things about growing up in a Chinese laundry.

Let me BEGIN with what might seem to be a digression: I’ll bet none of you knew that this past Thursday was:  “TAKE YOUR CHILD TO WORK WITH YOU” Day …The premise being: it’s good for kids to learn what their parents do at work, even ifthey go for only 1 day.

I, too, had the chance to watch my parents work when I was growing up. I worked with my parents in the laundry... not just 1 day a year, but EVERYDAY so that I often hated having to work in the laundry,... but I now must admit it did teach me some valuable lessons.

What “lessons” did I ‘learn’ from watching my parents work?

The Nature of Work
1. Work is hard. Ben Franklin, as we all know said, “Early to bed, early to rise ... well, he never talked to a Chinese laundryman because even though my parents went to bed early and got up early… six days a week, 52 wks a year, it did not exactly make them any healthier, or wealthier, ... but perhaps wiser.

How to Deal with People
3. The customer always thinks he is right... even when he is wrong.
For example, some customers thought we had lost their clothing articles but they later admitted they had never brought them in to the laundry... but had misplaced or left at home.

4. Golden Rule: Treat customers the way you wanted to be treated.  This approach did not always work, but it was a good starting point and usually worked.

5. Learn how to ‘read’ or size up customers. I learned to pick easy to serve customers to wait on ... and let my father deal with the obnoxious ones.

Use Your Intellect or Brain
6. Dealing with many illiterate customers, white and black, quickly taught me the value of being able to read and write and why education is so important.

7. Learn Problem Solving skills:
For example: Lost tickets were the bane of our existence... by the way, just how the mocking expression, “No tick-ee, no wash-ee,” arose is a mystery to me. No Chinese laundryman said that because we always found the customer's laundry, even without a ticket. But we had to open, and rewrap, many bundles to find the right clothes.
This taught me to develop strategies for finding a customer’s clothes efficiently.

8. Develop Organization and Memory Skills because "Time is money:"
In a laundry, you have to do more than just wash and iron clothes; after that you must sort and reassemble finished items for each customer and to do this efficiently you need to be organized and have a good memory.

9. Money Does Not Grow On Trees, (although it sometimes fell out of clothes).
Our parents did not indulge us, or themselves, with material items, but they always found the way to provide for essential needs especially if it had to do with our schoolwork.

Family Involvement Is Vital
10. Family cooperation is essential for survival... we all had to pitch in and work together in order to make a living.

These lessons were invaluable in helping me succeed throughout life. Now I want to conclude by contrasting two very different conceptions of laundry life
The first, I will call the Customer’s “Romantic” Philosophy of The Laundry
(imagine background song “Laundryman, My Laundryman”…to the tune of Chinatown. My Chinatown”)

There was an OLD commercial in which:
A white customer asks the Chinese laundryman: How do you get the shirts so white? The Laundryman’s proud but sly Answer: ANCIENT CHINESE SECRET!

In other words: We, Chinese were IMBUED by the white ad writer with magic-like power to transform dirty, smelly clothes into clean fragrant clothes. This stereotype shows that society saw Chinese as experts, but only in this one area of laundry work.

Now contrast that view which what I call: A “Realistic” Philosophy of Laundry... one that might represent the view of the Chinese laundryman:

Children, you should aspire to something higher than doing laundry; control your own future with knowledge and education. Our laundry will provide the financial support for you to get this valuable education.

In conclusion…we must recognize that successful though we may be, we did NOT do it alone. We stood on the shoulders of our parents and families, a strength of our Asian cultures. Tonight, in honoring these 67 outstanding members of the Who’s Who in Asian American communities, I think I can safely say that we are at the same time honoring their parents and families who supported them in pursing their dreams. 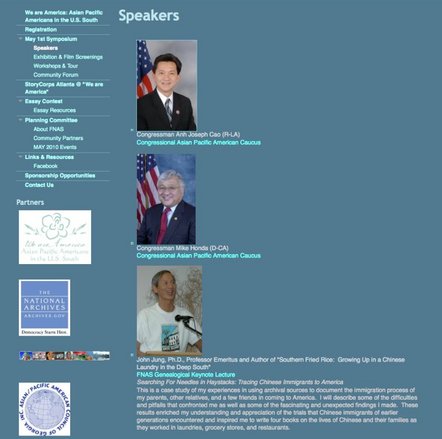 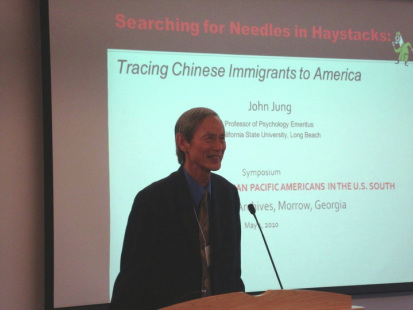 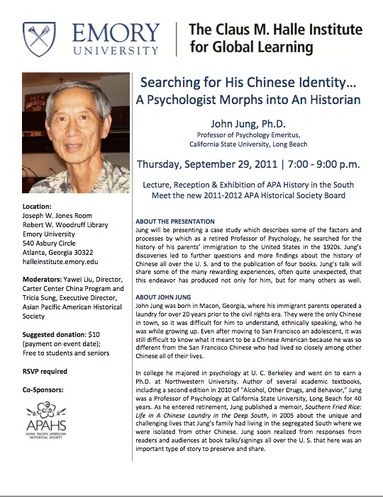 The Asian Pacific American Historical Society in conjunction with the Atlanta U.S.-China People's Friendship Association, and the National Association of Chinese Americans sponsored my talk about how my personal background growing up in a Chinese laundry in Macon, Georgia, led me eventually after retiring from a career as a university professor of psychology to write four books on Chinese immigrant run businesses in America.

I was invited to come back to my hometown, Macon, to speak about my writing career and participate on a panel discussion on creative nonfiction on Sat. and then on Sunday talk about my memoir about growing up in Macon, 'Southern Fried Rice.' 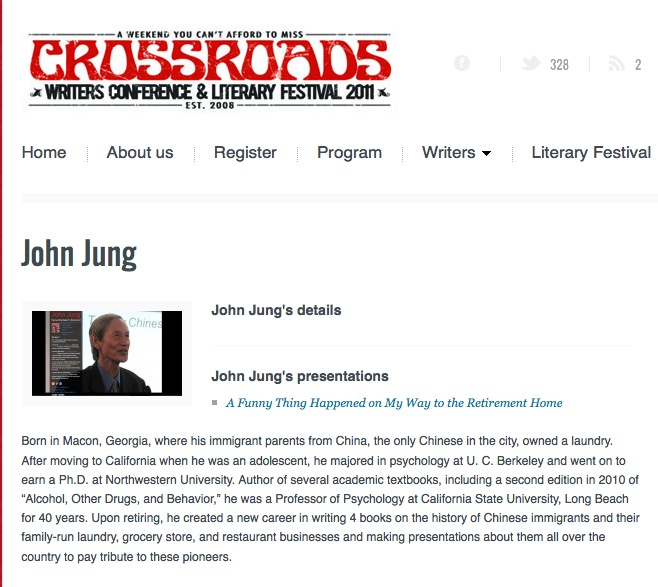