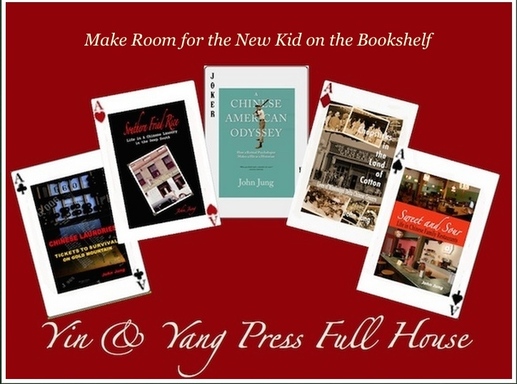 My 2005 memoir, Southern Fried Rice: Life in A Chinese Laundry in the Deep South. describes what it was like growing up in the Deep South as part of the sole Chinese family in our town where we ran a laundry during a time before the end of Jim Crow laws.  A second book, Chinese Laundries: Tickets to Survival on Gold Mountain, was a social history of Chinese laundries all over the U. S. and Canada.  Family-run grocery stores was the subject of a third book,  Chopsticks in the Land of Cotton: Lives of Mississippi Delta Chinese Grocers,  which focused on the history of Chinese in the Mississippi Delta. A fourth book, Sweet and Sour: Life in Chinese Family Restaurants, examined the history and development of family-run Chinese restaurants throughout the U. S. and Canada.

This new ' writing career' following my retirement after 40 years as a psychology professor was due not to a master plan, but to such a  highly unlikely fortuitous series of happy encounters and contacts traced on this website.

A fifth book in 2014: A Chinese American Odyssey: How a Retired Psychologist Makes A Hit As an Historian, describes this journey that led me, quite unexpectedly, to write these four books and give more than 100 talks about them around the country over the past decade.

My books blend history and psychology to focus on the life experiences of Chinese immigrant families from southeastern China that engaged in self-employment businesses such as laundries, groceries, and restaurants from the late 1800s until the middle of the 20th century. Their struggles against racial prejudices and other substantial obstacles and how they  overcame them, must be recognized, admired, and recorded because they paved the way for later generations of Chinese to have a better life.