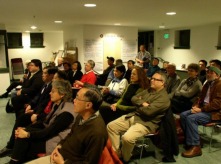 Book signing in San Francisco at the Chinese Historical Society in Chinatown received a warm reaction and led to other presentations. This was the very firm 'book reading' I had done, and I was not entirely sure how much verbatim reading and off the cuff talking would make the most interesting mix.  Myself, I don't like to hear people read as there is no eye contact.  I probably did about 50-50, partly because I felt I needed to read 'samples' of my writing if I am going to sell a book.  However, after this event, I have stopped reading verbatim entirely, preferring to try to engage the audience interest by giving anecdotes about aspects of the book, its background, and related material.  Q& A is my favorite part because it is unrehearsed and I get a chance to ad lib a bit. 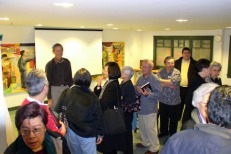 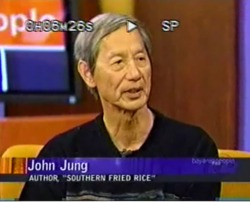 The CHSA press releases led to an interview on Channel 2, Oakland with Rosy Chu. I wasn't nervous even though I had never done a tv interview before.  However, I got a bit anxious in the waiting lounge prior to the taping of the show when someone came in with a cute dog.  My fear was that I would have to be on stage with the dog; a tough bit of competition!  Fortunately, my segment was first, and the dog sat in the wings to await his, or her, turn!  Oh, and the interview... it went well and was over in what seemed like a flash even though it was 8 minutes of tv fame. 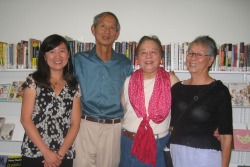 The Foster City branch library sponsored my talk about Southern Fried Rice.  Many of my relatives in the area were able to attend.  A bizarre confrontation occurred during Q&A, when a woman accused my parents of lying about where they were naturalized. She maintained she had census records showing they had been naturalized in Alabama, which was totally wrong. She unobtrusively left a CD on the desk that I discovered when leaving the library; it showed a Chinese couple, who happened to be named Jung, had been naturalized in Alabama just as she claimed.  However, these Jungs were not my parents.  Fortunately these types of incidents are much the exception as most of the interaction is cordial and warm.